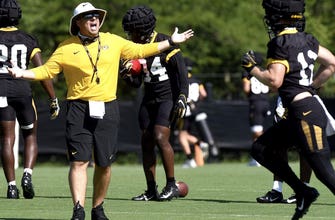 Alabama coach Nick Saban had nothing but praise for Eli Drinkwitz when discussing his Missouri counterpart this week.

Hard to find much fault when Drinkwitz has lost only one game as a head coach.

Of course, the up-and-coming boss of the Tigers also has only one season under his belt. But the 12-win campaign that Drinkwitz led at Appalachian State last season was impressive enough to land him the job of replacing Barry Odom, and with it the opportunity to challenge himself against such formidable foes as Saban and the mighty Crimson Tide.

“Eli did a great job at App State, winning the Sun Belt last year and going to a bowl game,” said Saban, whose second-ranked team opens its SEC-only schedule with a trip to Columbia on Saturday. “It’s going to be very challenging for our defensive team, not knowing for sure exactly what we’re going to see from them.”

If it’s a challenge for Alabama, it’s a downright gargantuan task for the Tigers.

They were about three practices into spring football when the pandemic ruined any opportunity to install the very basics of Drinkwitz’s offense and defense. Summer workouts were put on hiatus. And when the team finally reconvened for the delayed start to fall camp, they were faced with testing that often sidelined several players.

That may not be such a big deal to Alabama, where Saban’s system has become ingrained during a 13-season run that has included five national championships. It’s a big problem for a young coach trying to lay a new foundation.

“Obviously, it’s been a unique situation with all the different things, but we’re finally in some sort of sense of normalcy and we’re excited about the opportunity,” Drinkwitz said. “We’re excited, but we have a lot of work to do.”

The Crimson Tide, meanwhile, have made no secret they’re targeting another national title in a season when some programs aren’t playing yet (or at all). As far as Alabama quarterback Mac Jones is concerned, a schedule in which the Tide play only SEC opponents should be challenge enough to determine who is the best.

“This week it’s obviously Missouri, so we’re focused on that,” he said, “but in the long run, whoever comes out and wins all those games should go down as the best team to ever play, because the SEC is the best conference in America. And if you can win all those games and prove that you’re the best team, that’s pretty impressive.”

There were plenty of “OR” designations on the initial Missouri depth chart, indicating that competition was still going on for the starting job. The biggest one was quarterback, where redshirt freshman Connor Bazelak and TCU transfer Shawn Robinson have been challenging each other throughout the offseason.

Bazelak played sparingly last season when Kelly Bryant was hurt, but that experience means little with a new system in place. Robinson is more athletic and could be a better fit for the Tigers’ new high-speed offense.

Alabama, which had six freshmen start on defense last season, figures to have two more in the opener. Linebacker Will Anderson and defensive back Malachi Moore are listed as first-teamers on the initial depth chart.

Alabama linebacker Dylan Moses, a second-team All-American in 2018 who missed all of last season with a knee injury, said Anderson reminds him of himself as a freshman: “Just with being already physically ready to be on the college level, so I expect great things from him this year.”

Mizzou won the first two meetings with Alabama when the teams were in different leagues in the 1960s and ’70s, but the Crimson Tide have dominated their SEC contests. Saban led them to a 42-10 rout in 2012, won the SEC title game 42-13 after the 2014 season and rolled to a 39-10 victory two years ago.

Drinkwitz made it clear controlling the clock will be crucial against Alabama, given that the Crimson Tide return star running back Najee Harris and playmaking wide receiver Jaylen Waddle and DeVonta Smith. And the Tigers could have the stable in the backfield to pull that off with Larry Rountree III, Tyler Badie and freshman Elijah Young.

Saban said this week that he does not expect any players to miss the game due to positive tests or contact tracing, while the Tigers will be without at least seven. But that’s actually an improvement over 12 were ruled out initially; five tests that had been inconclusive turned out to be negative, allowing those players to return to the field.